Argox Product Launch in the Philippines a Success

Argox Product Launch in the Philippines a Success 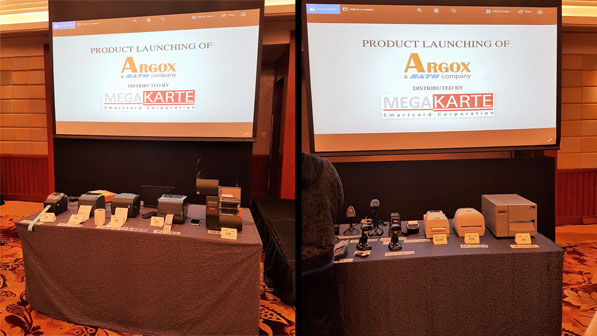 Argox brand was officially launched in Shangri-la, Makati, Philippines by its local distributor, Megakarte Smartcard Corporation.
The attendance of over 100 persons were mostly comprised by label manufacturers, resellers, government representatives and private companies who are all looking forward to use and take advantage of Argox brand equipment in their businesses.
Argox presence in the Philippines has been very minimal due to the market’s size. But as one of the robust economies in Asia now, it is about time that Argox shows a strong presence in the country to benefit from the economic growth.

This event was opened by Argox’s VP for Businesse Development, Perry Ho, and Megakarte’s CEO, Nance AL Sbini. Product presentation and demonstration were conducted by John Laredo (BD) and Wilbert Hung (FAE) together with the technical and sales team of Megakarte.
The launch was considered a success as it caused a buzz among the AIDC business community. Local distributor Megakarte has reported meeting schedules requested by guests and all those who read about the launch in newspaper ads. The future looks very promising for the Argox in the Philippines.
The event was two months in the making and was made possible by Argox and its Philippine partner,  Megakarte Smartcard Corporation.

Back
This website stores cookies on your computer. These cookies are used to collect information about how you interact with our website and allow us to remember you. We use this information in order to improve and customize your browsing experience and for analytics and metrics about our visitors both on this website and other media. To find out more about the cookies we use, see our Privacy Policy.
If you decline, your information won’t be tracked when you visit this website. A single cookie will be used in your browser to remember your preference not to be tracked.
Compare 0 Inquriy 0
Clear Compare
Inquiry
Login
Member login
Language
Search